Tracking Down the Secrets of Interstellar Dust 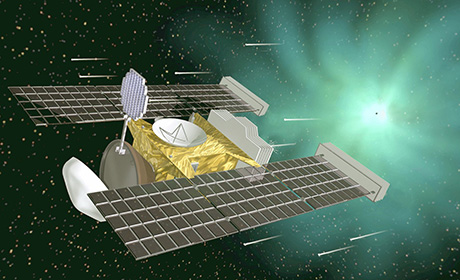 Light in the dark of the universe: An international research consortium is studying interstellar dust in search of ylem, or the original matter that formed the basic elements of life as we know it. The consortium of 33 research institutions, including scientists from Heidelberg University, has spent eight years analysing dust from interstellar matter collected by the Stardust space probe. Their initial results have now been published in Science and eleven other publications. The results indicate that the particles are heterogeneous in elemental composition, crystal structure and size, deviating substantially from their previously assumed properties.

“The space between the stars of our Milky Way is not completely empty; it does contain some percentage of its overall mass. This interstellar matter is extremely important because it gives birth to new stars and planetary systems,” explains Prof. Dr. Mario Trieloff. The Heidelberg University geoscientist coordinates the DFG priority programme “The First 10 Million Years of the Solar System”, with participating scientists from a number of German research institutes which are also involved in the international consortium. Most of the interstellar matter is hydrogen and helium gas; only one hundredth is dust, which also contains all the heavy elements. “The heavy elements in interstellar dust are the ultimate building blocks of terrestrial or earth-like planets,” says Prof. Trieloff.

The Stardust space probe delivered the first samples of this original matter to earth along with the initial dust samples from a comet in 2006. Special collectors were used to capture the interstellar dust from our solar system. The dust particles were smaller than the cometary dust, and even rarer. The international research consortium led by Berkeley University intensively analysed the collectors for eight years. The collectors were made from an extremely light aerogel that could gently decelerate the particles and keep them intact at expected impact speeds of up to 50 kilometres per second, or roughly 180,000 kilometres per hour.

The dust collectors first needed to be analysed for impact tracks, for which microscopic scans were created. The 1.5 million images were optically examined by 34,000 amateurs from across the globe who were specially trained using an online training programme. “In cooperation with the University of Stuttgart under the direction of Dr. Ralf Srama, in Heidelberg the collector material was shot by means of a unique particle accelerator to simulate and calibrate the impact process just to detect the promising impact tracks and derive the particle impact speed and other properties such as mass, porosity and chemical composition,” explains Mario Trieloff. Other impact tracks were analysed at the University of Frankfurt by the working group of Prof. Dr. Frank Brenker using highly sensitive synchrotron nano-X-ray fluorescence and at the Max Planck Institute for Chemistry using high-resolution raster electron microscopy. 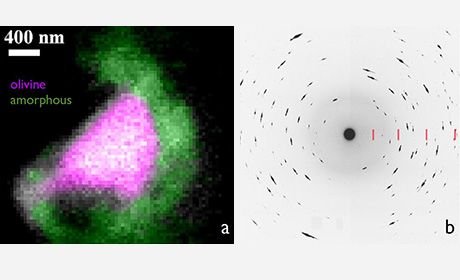 “We have been able to analyse just a few large particles thus far. Two particles, dubbed Orion and Hylabrook, were captured in the aerogel, another particle left a single track, and four particles pitted the foils between the aerogel honeycombs,” explains Prof. Trieloff. Contrary to conventional beliefs and models, the particles are not completely amorphous, but a mixture of different minerals, and ergo crystalline. For the first time the presence of silicates such as olivine and oxides such as spinel was verified, which are not consistent with the familiar carbon-rich stardust of meteorites. Neither were silica-based high-temperature condensates involved. The elemental composition is partly consistent with the cosmic norm, but there are significant deviations like calcium deficits and excess aluminium. “To sum up, we can say that the particles are heterogeneous with respect to elemental composition, crystalline structure and size. The percentage of crystalline components is higher than originally believed; there are different ferrous phases, including sulfides. These particles therefore clearly deviate from the average characteristics previously derived from astronomical observations and models.”

The geoscientist underscores that this is the first time dust samples from the contemporary interstellar medium are available in the laboratory; they are so rare that NASA would permit only non-destructive measurements. “The accuracy of these measurements is limited, however. The analytics for particles this small needs to be developed over the next few years. Later investigations will probably bring surprising results to light. The collectors probably also have a lot of as-yet undiscovered particles. Other scientific discoveries likely await.”

The work was funded by the FRONTIER Fund of Heidelberg University within the framework of the Excellence Initiative, the DFG priority programme “The First 10 Million Years of the Solar System – a Planetary Materials Approach”, and the Klaus Tschira Foundation.