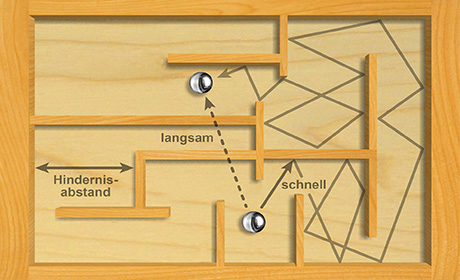 Protein movement in the cell can be compared to a marble in a labyrinth game: The marble travels short distances fast until it hits an obstacle. This results in “stop-and-go” movements and slowed down average speed over longer distances. By mapping the total distance and corresponding time, the researchers were able to measure the average distance between obstacles and devise a mathematical model that describes the mobility of proteins in the cell.

Numerous obstacles posed by cellular structures hinder protein movements within the cell. Researchers from Heidelberg University and the German Cancer Research Center have succeeded in mapping the intracellular topology by observing proteins in living cells on multiple time and length scales. By developing a new fluorescence microscopy-based technique, the researchers were able to measure how long it takes proteins to move over distances ranging from 0.2 to 3 micrometres in living cells. Under the direction of Dr. Karsten Rippe, the team analysed the data and developed a mathematical model to reconstruct the intracellular structures. The results of their research were published in “Nature Communications”.

Cellular structures such as membranes, the cytoskeleton and the DNA genome form a dynamic three-dimensional maze inside the cell. Proteins have to find their way through it to reach the sites where they are active. Accordingly, the spatial structure of the cell’s interior is a key factor for protein transport and cell function. “Cellular structures have been visualized in many microscopic studies. But it is still unclear how the diffusing protein in the cell ‘senses’ this internal network of obstacles,” says Dr. Rippe. To address this question, his team devised a method to infer the cellular topology from the random motion of proteins. The team built their own fluorescence spectroscopy system to observe fluorescent proteins. According to Karsten Rippe, the largest obstacles were densely packed areas of DNA in the cell nucleus.

“A protein in a cell moves much like a marble in a labyrinth game, jockeying its way through the maze,” said Michael Baum, the study’s first author, who pursued the research as part of his PhD thesis at Heidelberg University. The marbles move easily over short distances, but then they encounter an obstacle and are slowed down as they move along. This results in “stop-and-go” travelling with reduced average speed over longer distances. In their analysis of protein movements, the Heidelberg researchers mapped distances and corresponding translocation times needed for this travel, resulting in the average distance between obstacles. A mathematical model based on this data allowed the scientists to describe the measured movement of the proteins in the cell and reconstruct its topology – at a significantly better resolution than currently possible with light microscopy images, as Dr. Rippe points out.

“The obstacle structure encountered by a protein moving through the cell is porous, much like a sponge,” explains the Heidelberg researcher. Larger proteins were occasionally trapped in this dynamic structure for several minutes. Furthermore, drugs used in chemotherapy or to treat malaria were found to affect the mobility of proteins in the nucleus and make the DNA thicket more permeable. Dr. Rippe and his team now plan to apply their new approach in further experiments at the BioQuant Centre of Heidelberg University and the German Cancer Research Center. They will focus on the interrelation between drug-induced changes in the cell structure and protein transport as well as the disease-related deregulation of this process.

Funding for the research was provided by the Federal Ministry of Education and Research.