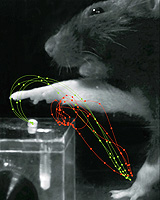 A rat reaches for a piece of sugar. The red trajectories indicate the movements after a stroke, the dots depict the position of the paw at regular intervals. Due to damage of the motor cortex, the rat is unable to coordinate its forelimb movement and misses the target. After rehabilitation (green trajectories) it can target its movements again.

A major stroke has serious repercussions on different brain functions and, even with intensive rehabilitation, improvement of the massively limited motor skills remains insufficient. A therapy that combines medication to stimulate the growth of nerve fibres and training of motor functions was studied on rats by researchers from the Heidelberg Collaboratory for Image Processing (HCI) of Heidelberg University in collaboration with scientists from Switzerland. A detailed computer analysis of the rats’ movement patterns and anatomical data showed that they only recovered completely with a regime of medication and correctly timed rehabilitation training. This was stressed by Prof. Dr. Björn Ommer from HCI. The research findings have appeared in "Science".

The brain has an enormous potential for regeneration to regain damaged functions. However, the ability for spontaneous recovery, in particular after serious injuries such as a major stroke, is limited. Now, Prof. Ommer states, the ideal combination of rehabilitation training and medication to support nerve tissue growth can lead to the almost complete restoration of the motor functions of rats after suffering a stroke and being paralysed down one side. An interdisciplinary team of neuroscientists from ETH Zurich and University of Zurich working with computer scientists from the Heidelberg Collaboratory for Image Processing of Heidelberg University studied patterns of newly formed nerve fibres and related them to the restoration of motor skills. “This is another important step in research towards an effective treatment of brain injuries and strokes,” says the Heidelberg scientist on behalf of the research team.

In the experiments, rats with a brain lesion caused by a stroke were administered a specific immune treatment that boosted the growth of nerve fibres in the injured area. According to Prof. Ommer, this was not enough to bring about the desired regeneration. In their tests the interdisciplinary team was able to show that, besides the immune treatment, it was only the addition of correctly coordinated physical training – reaching out to grasp food pellets – that brought about the desired restoration of motor skills. “With correct timing the rats regained an amazing 85 percent of their original performance,” explains Björn Ommer, quoting the recently published research findings of the Heidelberg and Zürich scientists. “By contrast, starting the training too early produced a very low performance of 15 percent.”

In order to define the right therapy, scientists from the Heidelberg Computer Vision Group headed by Prof. Ommer analysed large quantities of anatomical data and videos of movement patterns compiled by brain researcher Dr. Anna-Sophia Wahl (ETH Zurich and University of Zurich) in her studies of paralysed rats. They succeeded in measuring the course of the regeneration process for different treatment paradigms with great physiological exactness. Using their compositional algorithms for object recognition the Heidelberg computer vision scientists were thus able not only to detect the newly created structures but also to relate them to changes in movement patterns, likewise detected automatically. “The analysis of these connections then enabled the neuroscientists involved in this interdisciplinary cooperation to identify the optimum therapy,” underlined Prof. Ommer.