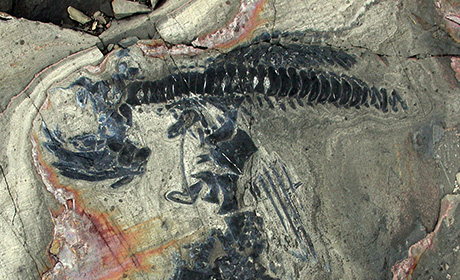 The cache of skeletal ichthyosaurs stumbled upon ten years ago in Chile turns out to be one of the world’s most significant fossil finds of marine reptiles from the Cretaceous period, containing many nearly fully preserved ichthyosaur skeletons as well as numerous other fossils. This is the conclusion of a German-Chilean research team of geoscientist Prof. Dr. Wolfgang Stinnesbeck of Heidelberg University and palaeontologist Prof. Dr. Eberhard Frey of the State Museum of Natural History Karlsruhe. The scientists have fully catalogued the discovery for the first time, while at the same time reconstructing the conditions that led to the excellent preservation and unusual concentration of “fish-lizard” skeletons. Their results were published in the journal “Geological Society of America Bulletin”.

In the southern summer of 2004, in Torres del Paine National Park in Patagonia near Chile’s southern tip, glaciologists stumbled upon the skeletal remains of ichthyosaurs, or fish-lizards, probably exposed just a few years earlier as the Patagonian glacier receded. Prof. Stinnesbeck and Prof. Frey as well as scientists in Chile have spent the last few years studying this new and scientifically rich site. In three expeditions the German-Chilean team of experts uncovered more than 40 virtually complete skeletons of adult and juvenile ichthyosaurs, and even embryos, as well as ammonites, belemnites, bivalves, bony fishes and plant remains. “This concentration is unique for Chile and South America, making the fossil site significant internationally,” explains the researcher from Heidelberg University's Institute of Earth Sciences.

According to the German-Chilean research team, the fish-lizard lived and hunted along the northeastern edge of a deep sea that then separated the Antarctic continent from Patagonia. Adults and juveniles hunted in groups in an underwater canyon rich with squid and small fish, their most important prey. As the continent gradually broke apart, earthquakes or avalanches on the steep slope occasionally unleashed devastating mudflows that sucked everything in their path down with them, including the marine reptiles. “The air-breathing fish-lizards became disoriented in the turbidity currents. They were sucked down hundreds of metres into the deep ocean,” says Prof. Stinnesbeck. “The fine sediment that was swept along immediately entombed the dead or dying animals.”

The German Research Foundation funded the studies at the site. In addition to Prof. Stinnesbeck and Prof. Frey, Dr. Marcelo Leppe Cartes of the Instituto Antárctico Chileno (INACH), the Chilean Antarctic Institute in Punta Arenas, as well as the Corporación Nacional Forestal (CONAF), the Chilean National Forest Corporation, took part in the project.