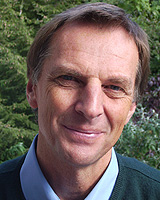 Heidelberg physicist Prof. Dr. Christof Wetterich is to receive generous five-year support from the European Research Council (ERC) in the shape of an ERC Research Grant for outstanding scientists in Europe. Prof. Wetterich’s research work on fundamental issues pertaining to cosmology, particle physics and gravitation physics will be given funding to the tune of approx. two million euros. Prof. Wetterich teaches and conducts research at Heidelberg University’s Institute for Theoretical Physics.

Prof. Wetterich’s international reputation rests among others on his work on dark energy, which makes up 70 percent of the energy density in the Universe. As early as 1987, over ten years before dark energy was actually discovered in the cosmos, he described the potential existence of so-called dynamical dark energy. The Heidelberg physicist studies the role played by dark energy in connection with cosmic background radiation and the structural evolution of the Universe. Another of his major research interests focuses on couplings between dark energy and dark matter. Prof. Wetterich has also devised a method called functional renormalisation, which traces the complexity of the macroscopic world back to the “simple” physical laws of the microcosm.

In the research project “Functional Renormalisation: From Quantum Gravitation and Dark Energy to Ultracold Atoms and Condensed Matter” funded by the ERC, Prof. Wetterich and his research group will be developing this method further with a view to applying it to fundamental issues in theoretical physics. These include the quest for a consistent quantum-field theory of gravitation and inquiry into the origins and properties of dark energy. In addition, there are plans to apply the refined method to the temporal evolution of structures in the universe, various aspects of solid-body physics and the physics of ultracold quantum gases.

After studying physics at the universities of Paris, Cologne and Freiburg, Christof Wetterich got his doctorate from Freiburg University in 1979. Born in 1952, he worked initially at Freiburg University, moving from there to the European Research Centre CERN in Geneva, the University of Bern and the German Electron Synchrotron DESY in Hamburg. In 1992 he was appointed professor at Heidelberg University. In 2005 Prof. Wetterich received the Max Planck Research Award for his research work on dark energy.

The European Research Council was set up in 2007 to apply an investigator-driven approach to the funding of frontier research with a view to advancing visionary projects and opening up new interdisciplinary fields of knowledge. Among its funding lines is the ERC Advanced Grant, which is awarded to exceptional established research leaders.

For more information, go to www.thphys.uni-heidelberg.de/~wetteric

Note for newsdesks
A digital photo of Prof. Wetterich is available from the Press Office.