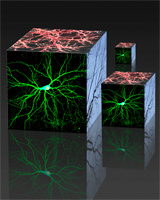 VEGF D regulates the arborization of blood vessels and neurons.

A molecule involved in the fuelling of tumour metastases also plays a decisive role in brain functions like learning and memory. The so-called signal molecule VEGF D is a key factor in ensuring that neurons can maintain their highly complex tree-like structures. This discovery has been made by a research team headed by neurobiologist Prof. Dr. Hilmar Bading at Heidelberg University’s Interdisciplinary Centre for Neurosciences (IZN). Their findings have been published in a recent issue of Neuron.

Neurons rely on their highly complex tree-like structures to establish connections with other neurons. The resulting networks are the “computational units” needed for proper brain functioning. Alterations in the branching pattern of these dendritic trees can affect network connectivity and may lead to cognitive impairments. A reduction in the length of dendrites and a simplification of their arborisation has been observed in various neurological disorders including Alzheimer’s disease, says Prof. Bading. These processes can cause severe loss of mental abilities.

The Heidelberg neuroscientists have now identified VEGF D as a key regulator of neuronal arborisation. Previously, VEGF D was best known to the scientific community for its role in promoting the growth of blood and lymph vessels (hence the name Vascular Endothelial Growth Factor or VEGF). Because it can fuel tumour metastases, VEGF D has been a target for certain kinds of cancer therapy. In animal experiments, Prof. Bading’s team has now shown that blocking VEFG D expression in neurons causes shrinkage of their dendritic trees, leading to severe impairments in the formation of long-term memory. “VEGF D plays a regulating role in brain function and vice versa, brain activity keeps the levels of VEGF D up,” says Prof. Bading. “We now have evidence that in certain neurological diseases, VEGF D may not be there in sufficient amounts, which may explain why diseased neurons are not fully functional and patients have cognitive deficits.”

The new findings suggest that strategies aimed at maintaining or restoring neuronal architecture by supplementing VEGF D represent novel avenues in the development of effective therapies for disease– and possibly also age–related cognitive dysfunctions. “At the same time,” Prof. Bading adds, “the unexpected role we have discovered for VEGF D in the brain calls for caution in the use of blockers of VEGF D signalling as a cancer therapy.” Hilmar Bading is director of Heidelberg University’s Interdisciplinary Centre for Neurosciences, where he also heads the Department of Neurobiology.