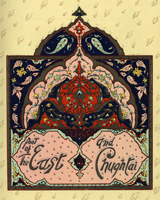 A lavishly illustrated luxury edition of poems by the writer and philosopher Muhammad Iqbal (1877-1938) has been presented as a gift to the library of Heidelberg University’s South Asia Institute (SAI). The large-scale volume weighs several pounds and was illustrated and designed by calligrapher Muhammad Abdullah. The donor is journalist Klaus Natorp, a South Asia expert who spent many years on the editorial board of the Frankfurter Allgemeine Zeitung in this capacity. Muhammad Iqbal numbers among Pakistan’s national poets. Heidelberg was one of the German universities he attended in the course of his studies (1907).

As the handwritten dedication testifies, Klaus Natorp was given the rare limited edition by former Pakistani head of state Mohammad Zia-ul-Haq (1924-1988). In the course of his career, Klaus Natorp interviewed the controversial military powerholder on various occasions. Normally the extremely exclusive luxury edition dating from 1968 was only presented to heads of state and other high-ranking recipients. Klaus Natorp feels that the South Asia Institute is the ideal repository for this generous gift. He was in regular contact with the Institute during his activities as a journalist and says that the fact that the Institute houses a special-area collection on South Asia has confirmed him in his decision to entrust this volume and a number of other books to the safe-keeping of the Heidelberg experts.

The name of Muhammad Iqbal is closely associated with Heidelberg. Since 1979 the Pakistani government has awarded the Allama Iqbal Professional Fellowship to the South Asia Institute (www.sai.uni-heidelberg/iqbal). The fellowship enables visiting professors from Pakistan to spend a lengthy research sojourn at Heidelberg University. Iqbal himself referred to his stay in Heidelberg as a “wonderful dream”. A street on the banks of the Neckar river (part of the B 37 thoroughfare) is named after him (Iqbal-Ufer).

Note for news desks
Digital photo material is available from the Press Office (see below).