The motility of a cell in the organism can be varied with the help of a system that resembles gear transmission in a car. The key factor in this system is the structural flexibility of a growing actin network that pushes the cell membrane forward and thus enables the cell to migrate.

The filamentous network in question is able to completely reorganise itself when it encounters increased resistance and is forced to step up the pressure required for forward motion. Physicists from Heidelberg University have developed a theoretical model to demonstrate this. Their research findings have now been published online in the journal PNAS.

Motility of animal cells evolved relatively early and in most cell types is therefore based on the same fundamental principles. The most important element in cell motility is the directional growth of a network of filaments from the protein actin. Actin filaments grow very quickly and can branch out again and again in order to form daughter filaments. The combination of growth and branching produces a dense polymer network effectively propelling the cell membrane forward during cell migration.

The ability of these filamentous networks to produce motion and force is so robust that it can also be exploited by foreign invaders like Listeria bacteria to propel themselves from one host cell to the other. It was even possible to reproduce this mechanism outside of cells, using plastic beads in a test tube. In recent years, experimental investigations by various international research groups have revealed many new details about this intriguing process, including some apparent anomalies. 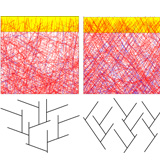 Computer simulation of an actin network reorganising itself to generate a larger propulsive force (from left to right). The orientation of the individual filaments in the network changes significantly relative to the direction of motion. The lower part of the illustration is a schematic representation of the two different network structures.

The Heidelberg research results demonstrate that different velocities in cell motility are crucially connected to the growth history of the network, notably the resistance it has encountered prior to a given measurement. In their work at the Institute for Theoretical Physics and the BioQuant research centre for quantitative biology, physics doctoral student Julian Weichsel and his academic supervisor Prof. Dr. Ulrich Schwarz have developed a mathematical model predicting the spatial organisation of the growing actin network as a function of its growth velocity.

At high velocities the network grows in a way that facilitates fast cell motility while producing only little force. When this is no longer sufficient to ensure forward pressure, the network reorganises itself to generate larger forces. Ultimately this leads to forward motility that is slower but at the same time more robust. The mechanism is comparable to the gearbox of a car. Shifting into a lower gear produces a larger force to get the car up a hill, albeit at a slower pace. Apparent anomalies in experimental findings indicating velocity differences in cell motility can be explained in terms of the “gear” in which the cell happens to be moving at the time of the experiment.