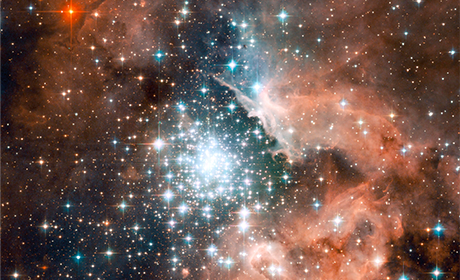 Image of a star cluster recently formed by the NGC 3603 nebula, taken by the Hubble Space Telescope. It is one of the most massive clusters known in the disk of our Milky Way Galaxy and its age is about two million years. The gas leftover from the cluster formation process is still lingering around.

Open star clusters offer astronomers the unique opportunity to observe stars of comparable age and chemical composition at the same distance. A study under the direction of Associate Professor Dr Geneviève Parmentier at the Centre for Astronomy of Heidelberg University now shows that these clusters can have a much longer lifespan than previously assumed. The researchers used simulations to investigate how the formation conditions of a star cluster affect its long-term evolution. The simulations indicate that these star clusters exist for up to a billion years – 100 times longer than previously assumed.

Dr Parmentier explains that stars form within clumps of gas and dust particles, in which the existing gas collapses locally under its own gravity. Newly formed stars are therefore found almost exclusively in gas-embedded star clusters, held together by the gravitational forces of the individual stars and their surrounding gas. However, a variety of influences, such as the stellar winds of massive stars and supernova explosions, can cause a loss of gas. At a certain point in time, the system's declining overall mass is no longer enough to hold the cluster together, and it breaks up. Prior analyses have shown that clusters die within about ten million years should the mass fraction of gas converted in stars be smaller than 30 percent. "Observations show, however, that very few of the known gas-embedded clusters reach this value," explains Dr Parmentier.

Earlier simulations, however, assumed that the parent gas clump of a star cluster is as efficient at forming stars in its inner regions as it is in its outskirts. “We have now modelled the evolution of star clusters whose parent gas clumps form stars more efficiently in their central regions than in their outskirts. The end product of this process is a cluster-forming clump which is more gas-poor in its inner regions than in its outskirts”, says Dr Parmentier. As a result, the gas loss has far less impact on the cohesion of the cluster than previously assumed, thereby greatly increasing the cluster's stability.

"Our simulations showed that star clusters survive the loss of their parental gas if by that time just 15 percent of the original mass of gas has been converted to stars," explains Bekdaulet Shukirgaliyev, the primary author of the study and a member of Dr Parmentier's team. "The average lifespan of such a star cluster thus increases to about a few hundred million years. Star clusters whose mass contains 25 percent of the original gas mass can even live up to a billion years." Observations of the oldest open star clusters in the Milky Way substantiate this result.

Until now, the researchers have studied the evolution of star clusters located at a similar distance from our home Galaxy centre as our Sun. Further studies will include clusters near the centre of the Galaxy and at the edges of the Milky Way. The current results of their research were published in “The Astrophysical Journal”.

Movie illustrating the expansion of a model star cluster following the expulsion of its residual star-forming gas, about 3,000 light-years from the sun. Due to the loss of the surrounding gas, the gravitational potential of the forming cluster becomes too shallow to hold all its stars together. As a result, the cluster expands and loses a fraction of them. This acute phase of mass-loss lasts a few tens of million years, which the cluster presented here survives, as its total life expectancy amounts to about 700 million years (the movie time-span itself is about 50 million years).