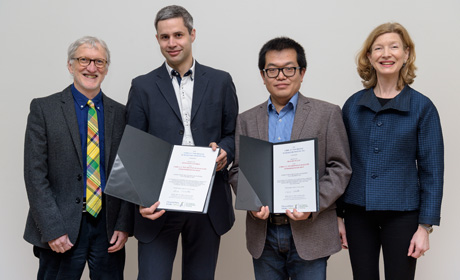 The Chica and Heinz Schaller Foundation has honoured two outstanding young Heidelberg-based researchers: Dr. Edward Lemke and Dr. Hai-Kun Liu. The award, named after its donors, endows each recipient with 100,000 euros in research funding. With the 2015 prize, the foundation pays tribute to Dr. Lemke’s and Dr. Liu’s excellent work in biomedical research. Edward Lemke conducts research in structural biology at the European Molecular Biology Laboratory (EMBL), where he is developing new biological tools for manipulating biomolecules. At the German Cancer Research Center (DKFZ), Hai-Kun Liu is investigating stem cells of the central nervous system and their role in the development of brain tumours. The award was presented to the two researchers during a festive event which took place on 27 January 2016 at Heidelberg University.

Using methods of high-resolution fluorescence microscopy, Dr. Edward Lemke’s research group is investigating proteins that are not completely folded, i.e. “intrinsically unstructured”. The researchers aim to discover how such proteins can form a barrier that protects the cell nucleus. They are also exploring how HI and hepatitis B viruses circumvent this protection in order to introduce their own genetic material. To pursue its work, Lemke’s team is developing innovative precision tools from chemical biology that can make the mechanisms directly visible at the molecular level in nano resolution without interfering with the function of the living cells. Edward Lemke has been a research group leader at EMBL since 2009, leading an Emmy Noether Independent Junior Research Group since 2010. In 2015 he received an ERC Consolidator Grant from the European Research Council. Dr. Lemke works in close collaboration with researchers at Heidelberg University.

Dr. Liu is investigating how stem cells develop in the adult brain and may contribute to the development of disease. Dr. Liu’s work on the relationship between brain stem cells and brain tumour stem cells has yielded important results. He identified the Tlx protein as the key molecule in brain tumour stem cells. When the Tlx molecule was genetically switched off in mice, the tumour stem cells were unable to regenerate and the diseased animals survived longer. Tlx therefore holds much promise for new treatment strategies for glioblastoma, the most aggressive type of brain tumour. Starting in 2011, Hai-Kun Liu headed up the Helmholtz Young Investigator Group, from which the Molecular Neurogenetics Department developed in 2015. The department is associated with the DKFZ-ZMBH Alliance, the strategic cooperation between the German Cancer Research Center and the Centre for Molecular Biology of Heidelberg University (ZMBH). His laboratory is also part of the university’s Interdisciplinary Center for Neurosciences. The European Research Council has been funding Dr. Liu since 2015 with an ERC Consolidator Grant.

The foundation established by researchers Prof. Dr. Chica Schaller and Prof. Dr. Heinz Schaller, has been supporting biomedical research in Heidelberg since 2000. It provided funding for an endowed professorship and has granted scholarships. The Chica and Heinz Schaller Foundation is particularly committed to setting up and financing the Schaller research groups that work at Heidelberg University and the German Cancer Research Center. The award named for its two benefactors is one of the foundation’s major funding instruments and has been presented annually since 2005 to outstanding young researchers in Heidelberg. The Chica and Heinz Schaller Research Award is endowed with funding in the amount of 100,000 euros.
During the ceremony the two prize winners presented their research in short lectures. The awards were presented by Prof. Dr. Rohini Kuner. The scientist, who is researcher at Heidelberg University’s Institute of Pharmacology, had been the first winner of the prize in 2005. Prof. Dr. Heinrich Betz, member of the Chica and Heinz Schaller Foundation’s Executive Board, moderated the event that took place at the BioQuant building.