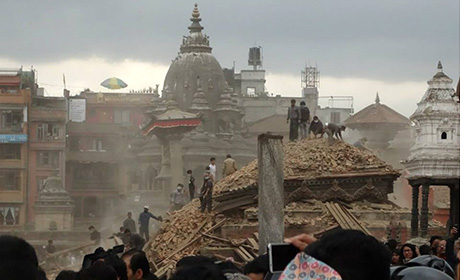 Patan Durbar Square, where the search for survivors as well as for statues of deities and other valuable items from the temples is going on

After the devastating earthquake in Nepal, the South Asia Institute (SAI) has launched a donation campaign to provide emergency relief. To this end, the Association of Friends and Supporters of the SAI has set up a special "Nepal Earthquake Relief Fund Heidelberg". The donations will be used, among other things, for a children’s home in Kathmandu that was levelled by the temblor. Saturday’s earthquake, with its epicentre about 80 kilometres northwest of the capital city of Kathmandu, claimed the lives of several thousands and destroyed major portions of Nepal's infrastructure. Neighbouring countries are also affected.

The South Asia Institute further reported that the SAI branch office in Kathmandu was largely undamaged by the quake. According to current information, neither employees nor friends on site sustained injuries. The South Asia Institute of Heidelberg University has maintained a liaison office in Nepal’s capital since 1987. Once emergency aid has been provided, the SAI then wishes to offer long-term support to rebuild the country’s infrastructure and reconstruct destroyed cultural monuments.