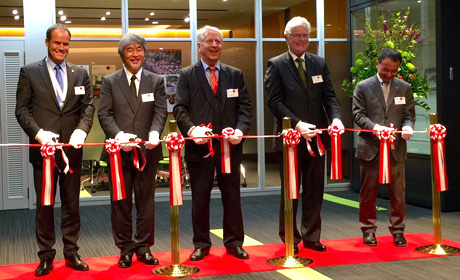 By establishing a new liaison office in Japan, Heidelberg University aims to intensify its international research contacts, set up new cooperations and extend exchange with partners in East Asia. The Heidelberg University Office in Kyoto started its work at the beginning of the summer semester. It is located on the campus of Kyoto University, which has enjoyed close relations with Heidelberg for 25 years. Prof. Dr. Bernhard Eitel, President of Heidelberg University, and a delegation of Heidelberg representatives took part in the festive opening on 14 April 2015. After the president and his counterpart from Kyoto University, Dr. Juichi Yamagiwa, had traditionally cut a ribbon with further representatives of the German-Japanese cooperative relations, the liaison office was officially inaugurated.

The Heidelberg University Office in Kyoto will work towards further promoting cooperation between Ruperto Carola and its Japanese partner institutions in research and teaching by developing new contacts and initiating innovative projects. Workshops and summer schools will also be supported. In addition, the liaison office will  serve as a contact point for Heidelberg students in Japan and assist Japanese and international students interested in study abroad in Germany. The Heidelberg University Office will support the university’s alumni activities and advance the establishment of a Heidelberg Alumni Club in Japan.

Last year, Kyoto University opened the Heidelberg office of its European Center,  which is located in the Old University. “The opening of liaison offices at both universities is another important building block of our cooperation,” explains Prof. Eitel. “Together with our Japanese partners, we want to contribute to strengthening academic and scientific exchange between Japan and Europe in general.”