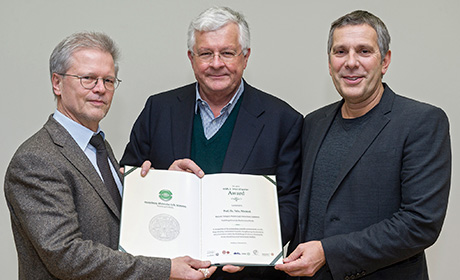 Prof. Dr. Felix Wieland, research group leader at the Heidelberg University Biochemistry Center (BZH), was honoured with this year’s HMLS Investigator Award for his outstanding research in the field of the molecular life sciences. The long-standing BZH director accepted the Heidelberg Molecular Life Sciences (HMLS) prize endowed with 100,000 euros on 12 December 2013. This award recognizes in particular Prof. Wieland’s commitment to the development of Heidelberg as a centre of science and his many years of work in the Heidelberg “life sciences community” to promote structures and connections beyond institutional and disciplinary boundaries. The HMLS initiative is part of the “Molecular and Cellular Basis of Life” Field of Focus anchored in Ruperto Carola’s institutional strategy. Participants include the Faculty of Biosciences, the Medical Faculties Heidelberg and Mannheim, the Max Planck Institute for Medical Research, the German Cancer Research Center and the European Molecular Biology Laboratory.

Felix Wieland (b. 1948) studied chemistry at Ludwig Maximilians University of Munich and worked on his doctoral thesis at the Max Planck Institute for Biochemistry in Martinsried. He then worked as a research assistant at MPI before transferring to Regensburg University in 1978. After his habilitation in 1984, he continued his teaching and research work in Regensburg for an additional two years. While there, he also joined the “Biochemistry of Membranes and Cell Surfaces” Collaborative Research Centre in 1981. A German Research Foundation award enabled the scientist to conduct research on the mechanisms of intracellular transport at Stanford University in the USA from 1986 to 1988.

In 1988 Felix Wieland was appointed professor of biochemistry at Heidelberg University. As a founding director, Prof. Wieland ran the BZH – an interdisciplinary centre uniting research in biology, medicine and chemistry under one roof – from 1997 to 2003. From 1991 to 2003 he was the scientific spokesperson for the “Molecular Mechanisms of Intracellular Transport Processes” Collaborative Research Centre at Heidelberg University. He has served as spokesperson for the “Dynamics of Macromolecular Complexes in Biosynthetic Transport” CRC of Ruperto Carola since 2004. Additionally he is a member of the university’s Academic Advisory Council, the strategic advisory board that oversees the implementation of the institutional strategy and the overall development of Heidelberg University. Prof. Wieland was President of the Society for Biochemistry and Molecular Biology; he is an elected member of the German Academy of Scientists Leopoldina and the Academia Europea.

Membrane biochemistry is the focus of his BZH research group, “Vesicular Transport, Protein-Lipid Interactions, Lipidomics”. Together with his team, Prof. Wieland is investigating how lipids and proteins function as the building blocks of membranes. Of particular interest is the structural basis for protein-lipid interactions in the biomembrane that acts as a “separating layer” between the different areas within a cell or between the cell's interior and exterior. The researcher and his colleagues are also looking into the molecular mechanisms involved in the formation of intracellular transport vessels known as vesicles. Vesicles are small bubbles in the cell that are coated with a protein layer; they transport and store substances and can release them into the environment by fusing with the cell membrane. Furthermore, Prof. Wieland’s team has contributed substantially to the development of a new field of research called lipidomics, a platform for which was developed at the Biochemistry Center. This budding discipline is uncovering the complex role of lipids in human health.

The award ceremony at the BioQuant Centre was opened by Prof. Dr. Thomas Rausch, coordinator of the “Heidelberg Molecular Life Sciences” initiative. Prof. Dr. Michael Brunner, the current director of the Heidelberg University Biochemistry Center, delivered the laudatory address before Prof. Rausch presented the prize. Prof. Wieland then followed with a presentation of his research work.