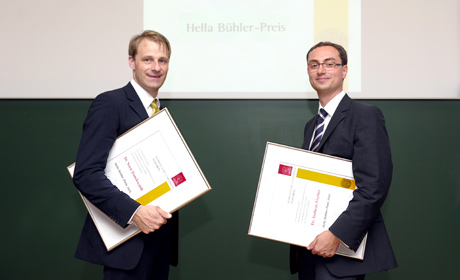 This year, two medical scientists from Heidelberg University are the recipients of the Hella Bühler Prize for oncological research. The laureates are Dr. Sven Danckwardt and Dr. Andreas Fischer, both of whom can look forward to prize monies to the tune of 75,000 euros apiece. Dr. Fischer is head of a research group on “vascular biology” which is located both at the Mannheim Medical Faculty of Heidelberg University and the German Cancer Research Centre (DKFZ). Until recently, Dr. Danckwardt’s research took place with the Molecular Medicine Partnership Unit, an institution run jointly by the European Molecular Biology Laboratory (EMBL) and the Heidelberg Faculty of Medicine. This is the sixth time the Prize has been awarded. It is angled at young researchers at Heidelberg University who have previously drawn attention to themselves by virtue of the excellent scientific quality of their research on cancer.

The presentation of the prize took place on 22 June 2011 in the BioQuant Centre in Neuenheimer Feld. Prof. Thomas Rausch, Vice Rector of Heidelberg University, opened the award ceremony with a speech of welcome. Subsequently an address was given by last year’s winner of the prize, associate professor Dr. Jochen Utikal, dermatologist at the Mannheim Medical Faculty of Heidelberg University. The speeches in honour of this year’s recipients of the Hella Bühler Prize were delivered by Prof. Dr. Matthias Hentze, an EMBL researcher and one of the two directors of the Molecular Medicine Partnership Unit. This year’s recipients then provided an outline of the research work for which they had been selected. Dr. Danckwardt’s talk was entitled “The Mysterious Relationship between Blood Coagulation and Cancer: Epiphenomenon or Functionally Relevant?”, while Dr. Fischer explained “How Signalling Pathways Keep Blood Vessels in Check and Prevent the Development of Cerebral Cavernomas”.

Sven Danckwardt (b. 1973) studied medicine in Tübingen, Berlin and San Diego (USA). After completing his studies in 2001, he received his doctorate in 2002 from the Humboldt-Universität zu Berlin for a pioneering dissertation on mechanisms of genotype-phenotype modulation. For this he was awarded the Robert Koch Prize of that same university. Subsequently he worked as an assistant physician in Berlin before moving to Heidelberg University Hospital in 2003. Dr. Danckwardt pursued his research as a postdoc at the Molecular Medicine Partnership Unit of EMBL and the Heidelberg Faculty of Medicine. On 1 April 2011 Dr. Danckwardt took up his appointment as professor at the Medical Faculty of the University of Halle-Wittenberg.

The objective of Dr. Danckwardt’s research is to study the basis for the “mysterious” relationship between active blood coagulation and the genesis and metastasization of tumours. This hitherto largely unknown connection has far-reaching consequences for the prognosis of cancer and in the last few years has been observed and described in clinical contexts above all. Dr. Danckwardt’s investigations are designed to help clarify the underlying molecular mechanism and hence gain new insights benefitting tumour biology and the therapeutic approaches deriving from it.

Andreas Fischer (b. 1976) studied medicine in Würzburg and Boston and received his doctorate from Würzburg University in 2003. After acquiring a licence to practise medicine, he undertook a three-year postdoc training course at the Biocenter of Würzburg University before moving to the Mannheim Medical Faculty of Heidelberg University and the German Cancer Research Centre in 2007. He conducts his research at the German Cancer Research Centre (DKFZ) in the framework of the strategic collaboration with Heidelberg University’s Centre for Molecular Biology (ZMBH), the DKFZ-ZMBH Alliance. In January of this year, Dr. Fischer was awarded the Chica and Heinz Schaller Prize, worth 100,000 euros, for his pioneering work on cellular signalling pathways.

The Hella Bühler Prize has been conferred on Dr. Fischer for his investigations on the formation of vascular malformations in the brain. These so-called cerebral cavernomas are characterised by greatly extended, unstable and amorphous blood vessels. If these cavernomas grow beyond a certain point, there is an increasing danger of bleeding from these vascular outgrowths, which can lead to convulsions, neurological failure or even a stroke. Dr. Fischer’s research indicates that excessive, uncontrolled vascular growth and the formation of cavernomas are caused by a dysfunctional signalling pathway in the endothelial cells lining the vessels. Using an animal model, his research group is testing the use of cancer medication that inhibits the formation of new blood vessels and is hence also a promising candidate for use in the treatment of cavernomas.

The research prize donated by Heidelberg dentist Dr. Hella Bühler (1910-2002) is designed to support young Heidelberg scientists in continuing and deepening their outstanding work in the field of cancer research. This is the first year in which two recipients whose research work is equally deserving of support have been selected by the awarding committee.