Focus 3 · Social and Cultural Communication: Migration and Contact in Ibero-America

RESEARCH FOCUS · Communicative dynamics of linguistic and cultural communities · Mobility and its linguistic and sociocultural consequences · Cognitive, perceptive, and identity-related dimensions of migration and contact in Ibero-America

The starting points of research in Focus 3 are the social and linguistic dynamics of communication in Ibero-America and its areas of influence. Many of the geographic, political, institutional, sociological, and ethnic spaces that constitute the macro-region of Ibero-America are multilingual, and the linguistic dynamics within and between these spaces are multifaceted. Likewise, the relations with external regions reflect similar features and a similar level of complexity.

Additionally, our research is focused on the linguistic and sociocultural consequences of mobility that arise from the migration of people. In Ibero-America, the flows of people have greatly increased over the last one and a half century, to the point of affecting its societies, politics, and economy, as well as its educational spaces. It has shaped Ibero-American linguistic landscapes and established ways of communication within the macro-region and its areas of influence. In the spaces of migration created by mobility, specific linguistic dynamics arise and the inhabitants of these regions develop particular social and communicative customs and patterns. Our researchers are particularly interested in border spaces, urban communities, and second and third generation heritage speakers in Ibero-America and related regions, such as the USA or Europe. 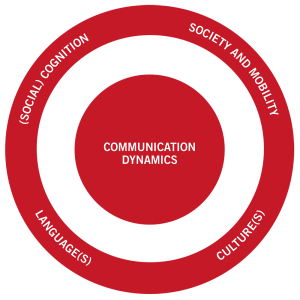 Spanish in Europe is the demographic study of Spanish speakers through the social, cultural, and educational spaces they create and inhabit in different European countries and regions. Beyond the Spanish-speaking areas, the contemporary evolution of the Spanish language is dependent on two processes: migration flows and the spread of Spanish as a foreign language (50 million foreign-language speakers, thereof 31 million in Europe). The goal of this project is to describe and analyze how groups of speakers are shaped by these processes and how different social and linguistic environments determine their language competency and use.

At the intersection of demography, geography, and the sociology of languages, this project focuses on the interactions between language speakers, learners, and the institutions surrounding them (family, school, higher education). Mapping these networks allows us to describe the dynamics surrounding the transmission and use of the Spanish language. Additionally, spaces where Spanish is in contact with other languages in Europe can be identified. This helps us to better understand the construction of the multilingual repertoires of individuals that connect Ibero-America and Europe communicatively.

Known by its Spanish acronym PRESEEA, the longtime Project for the Sociolinguistic Study of Spanish from Spain and America has gained an important standing within the research community for the study of contemporary spoken Spanish. PRESEEA aims to provide researchers with trustworthy data relating to spoken language that are representative of a wide geographical area, sociolinguistically defined, and comparable. In order to optimize their efficacy in research, the data, which are in outstanding technical condition, are transcribed according to jointly defined criteria. Sociolinguistic research conducted in the Americas and Spain is being coordinated to facilitate the comparability of studies and the exchange of basic information (Moreno Fernández 1996, PRESEEA 2003). PRESEEA is being developed by a large network of research teams from 44 universities in Latin America, the USA, and Spain. Having joined this network in 2020, the Heidelberg Center for Ibero-American Studies (HCIAS) has become a coordinating and reference center for the elaboration of PRESEEA.

The technical renewal and anchorage of PRESEEA at Heidelberg University has been partially funded by Field of Focus 3 (2019).

The Spanish language in the United States has a historical presence and contemporary quantitative and qualitative dimensions that require continuous analysis using the most appropriate methodological instruments. To achieve this, a corpus specific to US American Spanish is being created within the framework of the CORPEEU project. The task of elaborating this corpus of contemporary Spanish produced in the United States consists of compiling manifestations of spoken and written language in this domain. These manifestations, including translations by Spanish speakers in the United States, must be varied in time, geography, social origin, mode, and style, without predetermined criteria for exclusion. The project was initiated in 2017 at the Instituto Cervantes at Harvard University, in close collaboration with the North-American Academy of the Spanish Language. In 2020, the HCIAS will become the main reference center for the elaboration of CORPEUU.

The further technical development and anchorage of CORPEEU at Heidelberg University has been partially funded by Field of Focus 3 (2019).