Focus 1 brings together perspectives from political science, economic geography, sociology, economics, and religious studies in order to study the relationships between and interdependencies of social, economic, cultural, and political transformations, the inclusive and innovative socio-economic development and social cohesion in Ibero-America. In the last few decades, this area has undergone extensive changes in all spheres of societal organization. These changes have accelerated profoundly in the first two decades of the 21st century due to globalization and new information and communication technologies, which have put social cohesion to the test.

In the political sphere, democracy has asserted itself as the main form of rule since the mid-70s, with few exceptions. Its consolidation, however, has only partially been achieved and has been subject to authoritarian relapses, especially in Latin America. Ibero-America’s economic systems have been influenced by the “neoliberal turn“ and the growing globalization of the world economy. This has not only brought significant changes to economic structures but also to situations of social conflict, and it has also contributed to political ruptures which have led to the resurgence of populist currents. At the same time within the social systems of Ibero-America, these systemic changes were confronted with deep-rooted traditional social structures. The persistence of such structures is expressed through unaltered social inequality and the presence of informal ground rules. In turn, the cultural systems experienced an “uneven“ modernization that oscillates between the traditionalism of various imprints and post-materialism. Simultaneously, these developments represent social processes of differentiation, pluralization, and fragmentation that interact in the political, the economic, the social, and the cultural spheres. 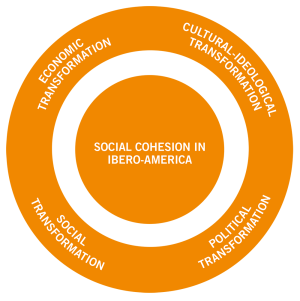 Our research will focus on the question of to what extent democratic institutions function stably or to what extent they are recognized as the “only game in town”. The question of societal stability does not only encompass “bottom-up” challenges to institutions, but also includes challenges from parallel forces that, in turn, are an indicator of deficient social cohesion. Closely related to these challenges are the dynamics of public communication, an area of research which we are planning to focus on in the future. Another aspect that we will concentrate on is the ability and competence of specific actors to transform political and economic models into functional economic and social programs. Inclusive institutions for economic development and spatial socioeconomic disparities are of particular interest, as well as the evolution of networks and their economic effects on knowledge and innovation. Another line of research that we are interested in concentrating on is the implementation of bioeconomic models and the thereto-related communicative dynamics of human-environment-relations. In addition, we will tackle the question of the extent to which path dependencies and regional trajectories in social cohesion can be strengthened or disrupted by individual and/or collective actors. Central aspects we will be focusing on are the inertia of the arrangements of the economic and political elite, as well as the production, reproduction, and transformation of patterns of social inequality and regional disparities in the wake of corporate inequality regimes. With regard to the questions relating to cultural systems, we will analyze the role of the church(es) and religious groups in political development and social cohesion, focusing on Latin America, where they are among the most highly regarded social/political institutions, influencing sensitive questions related to morals, as well as questions on social and economic ethics.

Transformation of religions and ideologies in Ibero-America