The Ticket to Freedom 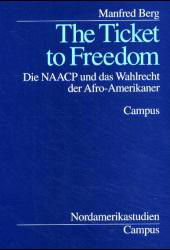 [Further information on the author]

The Ticket to Freedom is a first-rate study of the struggle for voting rights waged by the National Association for the Advancement of Colored People (NAACP) over several decades. Manfred Berg has utilized much of the relevant published secondary literature and also made extensive use of archival materials, especially the NAACP collection at the Library of Congress. In addition, he has drawn upon some interviews with key civil rights personnel. Following an introductory section that outlines various forms of political discrimination aimed at African Americans, the book, as concerns the period 1910–1940, proceeds to discuss the establishment and consolidation of the NAACP, the question of voting rights and political discourse, and the topics of voter mobilization and party politics. There then comes a section on the race question and political change, 1940–1955, and finally a section on political reform and social movement, 1955–1970. The subject matter is set in the context of national and international politics.

Berg takes up some of the key issues that separated the NAACP from other civil rights organizations such as the Student Nonviolent Coordinating Committee (SNCC), the Congress of Racial Equality (CORE), the Nation of Islam, and other manifestations of black nationalism. The book acknowledges the contributions made to the struggle for voting rights by the more radical, direct action–focused organizations but emphasizes the effective work done by the NAACP, which could rely on greater continuing stability, greater access to funding sources, and a larger membership than any other civil rights group, which meant having a substantial national presence.

At the same time, Berg draws attention to the bureaucratic tendencies that existed in the NAACP leadership. The book notes the historic role played by W. E. B. Du Bois, perceptively discusses the splits from the association that occurred in 1934 and 1948, and takes account of the reality that the NAACP, at least most of its influential leaders, sought to work within the premises of capitalist society. During the era of McCarthyism, the NAACP generally did not challenge repression unless directly aimed at itself or at African American civil rights, at the same time subscribing to the anticommunism that rationalized the suppression of dissent. In a volume of such broad scope omissions are to be expected, but the interesting discussion of the 1964 Freedom Summer and the Mississippi Freedom Democratic party would have been strengthened by reference to the differences that emerged around the issue of legal representation for the freedom activists. A basic point made in the volume is that, although the winning of electoral rights signified a major victory, the victory was incomplete in the absence of widespread change in the social and economic conditions of black Americans.

Numerous scholars beyond the United States have ably focused upon the African American struggle, recognizing its international significance and centrality to the American experience. Berg's book is in the forefront of the work emerging from such scholarship and merits the attention of readers everywhere concerned with the valiant battle for racial justice.