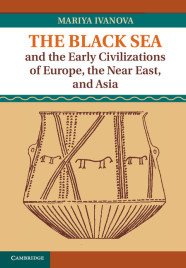 The Hospitable Sea. Technology and Society in the Black Sea Region, 3500-3000 BC

It has long been recognized that a rapid advance in technology and the emergence of new social institutions and economic forms across the Near East and Europe concentrates around 3500 BC. The research on this “horizon of change” owes especially to Andrew Sherratt’s (1981, 2006) disputed concept of secondary products revolution.

One of the most contentious aspects of technological change represents the development and spread of new animal and plant domesticates, new breeds of livestock and new modes of animal use in association with technological inventions like the plough, wheel, threshing sledge, and extensive wool and milk industry. Not less significant appears the development of pyrotechnologies of a new scale and sophistication – smelting of copper in a continuous process and on industrial scale, smelting of silver, gold mining, various techniques of alloying, casting in two-partite moulds and in cire perdue.

Building upon V. G. Childe’s concept of urban revolution, A. Sherratt argued that these innovations do not represent a series of coincidences, but appeared in connection with the concentration of resources and capital in an emerging urban core including Ancient Mesopotamia and its immediate neighbours. Sherratt’s point that the phase of “research and development” took place in the urban centres and the technologies spread as a complex is certainly appealing. However, the remarkably fast dispersion of this complex does not find comparisons in the preceding periods (e.g. in the spread of food producing economy or the beginnings of copper working) and deserves special attention. Sherratt favours (at least for the traction complex) a model of dispersion through contacts of elites and emulation of “elite practices”. Does the evidence still support this model when we include a wider range of technologies and look into the details? With this project I intend to change the focus from the place of origin to the mechanisms of adoption and adaptation of new technologies and thus continue at the point where previous research stopped.

My research unit includes the coastal areas of the Black sea, a key geographical region and presumably the missing link between the two centres with earliest evidence of technological sophistication – Mesopotamia and the Carpathian Basin. The Black sea is intriguing not only as an axis of communication, but also as a cultural area in its own right – a field of interaction for societies of very different technological backgrounds and social scale and structure. I am collecting and systematizing data about the technology of food acquisition, processing of raw materials, transportation, food preparation and storage, information processing, etc. for the human groups inhabiting the coastal areas of the Black Sea with the ultimate goal to understand the mechanisms of spread and adaptation of technological knowledge. Does the archaeological record support the existing assumptions? Are there parallels to phenomena in earlier or later periods? Which model corresponds best to the evidence – diffusion, “leap-frog” dispersal, trading or interaction networks, emulation?

Technological discourse in archaeology is traditionally constrained to technical hardware – an approach which is possibly rooted in the Western European notion of “objectivity” (keeping to “objects”) and ideology of objects. Technological change is explained in terms of inherent mechanical attributes of raw materials, resource accessibility or principles of efficiency and necessity but not as the result of a cultural choice (Pfaffenberger 1992). Unsurprisingly, technological studies often culminate in lists of tools and techniques to categorize social formations and thus in implicit technological determinism. The spread of a technique needs no further explanation except its “utility”. Recently, a renewed interest in the studies of ancient technical systems brought about stimulating new perspectives to the social meaning of technological practice and performance. Research in traditional cultures shows that technologies are not divorced from society but operate in accordance with a coherent set of social and cultural values. Thus, they change only if human agents purposefully change the way they produce and use things and integrate the new objects and practices in their traditional repertoires. In line with this theoretical position, one main objective of the project is not just to record the spread of innovative technological practices, as if they were a “wave” sweeping over a society, but to recognize the motivations and choices involved in adoption and adaptation.

Lemonnier, P. 1992. Elements for an Archaeology of Technology. Ann Arbor.

Ivanova, M. 2013. The Black Sea and the Early Civilizations of Europe, the Near East and Asia. Cambridge: Cambridge University Press (2013).