Update September 2016: The Center for Hellenic Studies (Washington DC) has published online the first four volumes of our monograph:
Particles in Ancient Greek Discourse: Five Volumes Exploring Particle Use Across Genres
http://chs.harvard.edu/CHS/article/display/6391
The four volumes consist of: I. Foundations, II. Particle use in Homer and Pindar, III. Particle use in Aeschylus, Sophocles, Euripides, and Aristophanes, IV. Particle use in Herodotus and Thucydides. Besides gathering a general introduction and our conclusions, volume I explores particle studies in ancient scholarship, and gives an overview of contemporary approaches to discourse markers, particles, and cognates. The fifth volume, the Online Repository of Particle Studies (ORPS), is a database whose interface has now been set up. Shortly it will be available for consultation, and in the upcoming weeks the data will keep growing. 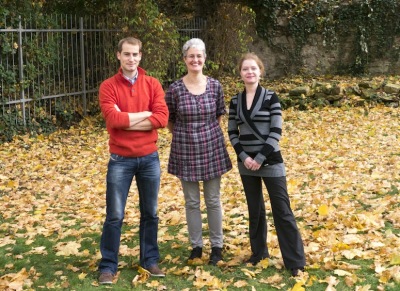 There are only three forms of existence in which man remains an individual: as philosopher, saint, and artist. Just consider how an academic kills his life: what does the study of Greek particles have to do with the meaning of life?

Despite Nietzsche’s warning, in January of 2010 dr. Anna Bonifazi established an Emmy-Noether research group, which is completed by the PhD students Annemieke Drummen and Mark de Kreij. The aim of the project has been to re-examine particle use in a corpus of archaic and classical Greek authors, taking into account both forgotten philological insights and contemporary linguistic theory.

We have been working on Homer, Pindar, Aeschylus, Sophocles, Herodotus, Euripides, Aristophanes, and Thucydides, with the intention of better understanding how particles work with other parts of language, not only within clauses and sentences, but also within narrative episodes or even entire works. In our research we focused individually on specific authors, but have been in a constant dialogue with each other to share challenges and insights. An especially productive and pleasant (pace Nietzsche) way of discussing particles has been the joint reading of problematic or clarifying passages.

On a local basis we have done this in regular meetings where we discussed curious occurrences of (groups of) particles in any of our authors. We have also had the opportunity of inviting several guests, to benefit from their knowledge through both a public lecture and a meeting where we discussed questions more specific to our project. On a global basis, we have undertaken to gather wise minds to discuss passages from our corpus in a series of international workshops. Herodotus and Thucydides were the subject of the first event in November 2011. In May and November 2012 two more meetings followed, one on Homer and Pindar, and one on Aeschylus, Sophocles, Euripides, and Aristophanes. We have experienced all three workshops as very fruitful and are grateful to all participants.

At the department of Classics at the University of Heidelberg we maintained close ties with the faculty, and have been involved in teaching. To keep up-to-date with current developments in the fields of Classics and Linguistics, we visited relevant conferences when possible, both to listen to colleagues and to share our own progress. So far, we have presented papers in Italy, the United Kingdom, the United States, the Netherlands, Russia, Belgium, France, Switzerland, Spain, and Germany.

Our research generally has taken the form of textual analysis, ranging from readings of particles in situ to global, corpus-based investigations. Also, we have taken it upon us to gather most of the literature (especially pre-twentieth century) on the most frequent particles in the corpus. The ‘guides to scholarship’ that result from this process give a more complete status quaestionis than has been available for the last century, and at the same time provide starting points for future research.

Nietzsche may have been right about staying an ‘individual’, but by working as a collective we hope to be able to produce more valuable tools for classicists who encounter these texts on a daily basis. Perhaps we should, then, take heart from Schraut, who tells us (if we may call ourselves young yet):

The dead language should come alive in the young man’s soul; and that entails that he understands the particles, which especially in Greek are the nerves through which the mind pervades the body of speech.